The Mortgage Bankers Association reported a large drop in forbearance volume this week, with the percentage of mortgage loans in forbearance dropping 26 basis points to 3.50% (down from 3.76% last week). This is the 20th straight week of declines in forbearance volume, and while this is good news overall, the MBA was also quick to point out that almost 60% of borrowers currently in forbearance are in extensions for longer than 12 months.

This week’s release is a reminder of the K-shaped recovery that many have observed in the housing market over the last year.  While many borrowers are still able to take advantage of record-low rates, those impacted by COVID are still struggling and will require further attention from their servicers in the coming months.

Given that narrative and the fact that we just entered the second half of 2021, it feels like an appropriate moment to reflect back on what has transpired over the last six months and what it means for borrowers and mortgage servicers going forward.

Tied for first place, the modifications to the Regulation X rule made significant updates to existing mortgage servicing rules by setting the standard for how servicers should deal with delinquent borrowers.

The CFPB moved away from a proposed “special foreclosure review period” that would run through the end of the year, instead embracing “loss mitigation safeguards” that would allow foreclosures to resume in certain instances, including for borrowers who were severely delinquent at the start of the pandemic, for vacant and abandoned properties, and for non-responsive borrowers.

The other contender for first place is the Supreme Court’s ruling in the Collins v Yellen case. The Supreme Court’s decision means that the director of the Federal Housing Finance Agency (FHFA) can be fired by the President (this is similar to the Selia Law v CFPB ruling that found the CFPB director position to be unconstitutional), effectively turning the FHFA director into a political position (just like the CFPB director position) that will change each time the Presidency changes parties.

Next up is the Biden administration’s yet-to-be-confirmed nomination of Rohit Chopra as CFPB Director. Though Chopra’s confirmation has been delayed, the nomination is an important marker in establishing the team that will be responsible for housing policy in the new administration. Acting Director Dave Uejio is slated to move over to HUD once Chopra is confirmed.

The Administration’s announcement marks the last extension, signaling an end to this CARES Act accommodation and a look towards what comes next. For a brief recap of how these policies evolved throughout 2020 and into this year, here’s a quick timeline of the policy roadmap: 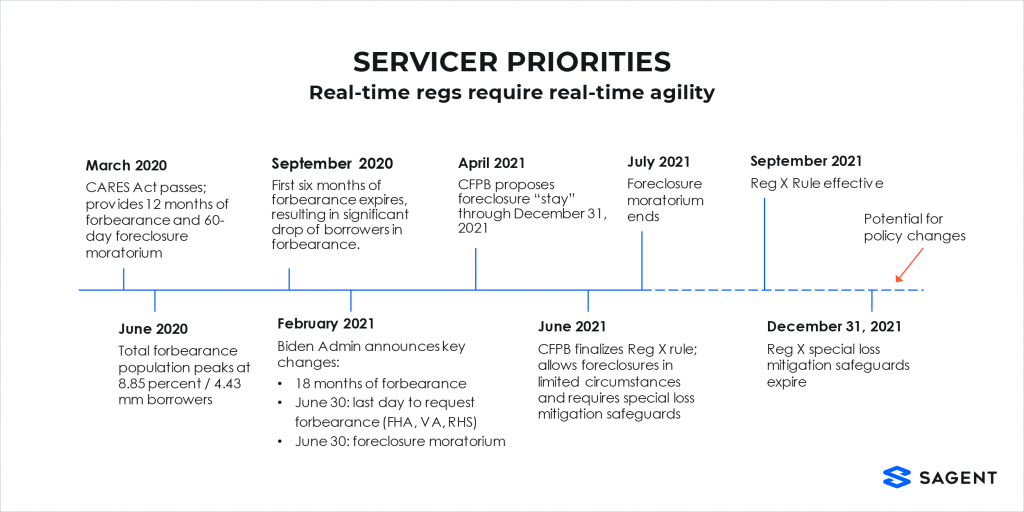 A new FHA loss mitigation tool, the Advance Loan Modification (ALM) option, was announced in June, creating a new home retention option for borrowers impacted by COVID-19 hardships. According to the HUD announcement on June 25, the COVID-19 ALM option “is a permanent change in one or more terms of a Borrower’s Mortgage that achieves a minimum 25 percent reduction to the Borrower’s monthly Principal & Interest (P&I) payment that does not require Borrower contact.”

This demonstrates that policymakers are still looking for creative solutions to assist borrowers impacted by COVID-19.

Similar to FHA, the FHFA in its capacity as regulator of Fannie Mae and Freddie Mac mandated that each expand eligibility for interest rate reductions to borrowers with mortgages that have a loan-to-value less than 80 percent. This demonstrates yet another example of creative solutions to reach borrowers in need.

All of these actions set the stage for a busy second half of 2021.  With the updates of Regulation X and the ending of foreclosure moratoriums, servicers will see an even higher demand for loss mitigation as we enter the final phase of the post-COVID response. 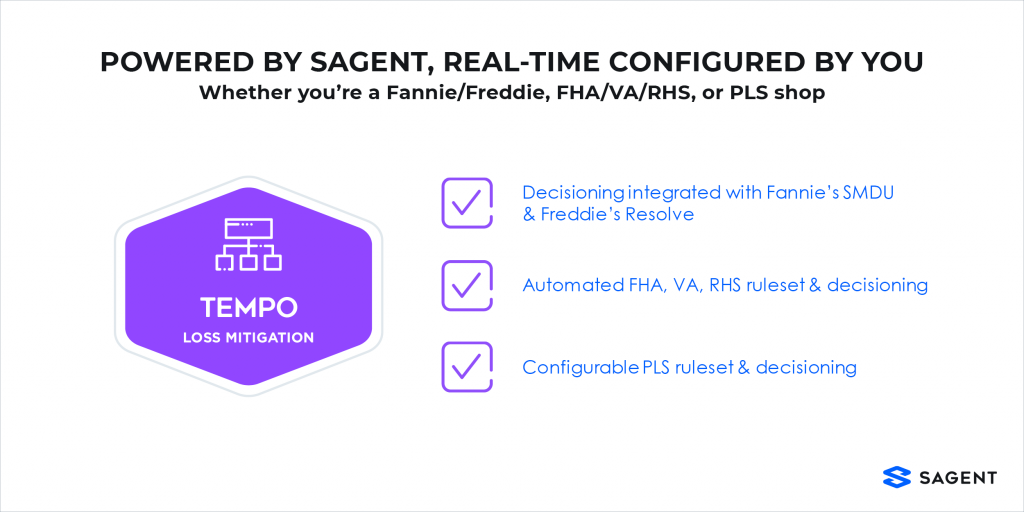 Sagent’s 3 core performing, non-performing, and consumer platforms have kept servicers in front of all policy and regulatory changes during this unprecedented era.

We’re on standby to talk about how to help you care for borrowers during this final and most critical phase of COVID recovery.

The next few months are critical for servicers. How can we help you stay ahead of regs and customer needs?