March 27 marked the one-year anniversary of the signing of the CARES Act. Many industry narratives over the last few weeks have discussed the many actions taken last March as COVID-19 spread throughout the United States.

In reflecting on the drafting and eventual passage of CARES, it’s easy to forget the level of confusion that reigned supreme during the early days of the pandemic response. Let’s reflect on the lessons we have learned in the past year since the CARES Act was passed and what that means for servicers going forward.

The legislative process is slow and deliberate by nature. Policy is drafted, debated, and marked up in committee before it can make it to the floor of either the House or Senate.  This process can take months (or in some cases, an entire two-year Congress) to get through the necessary negotiations to get a bill to the President’s desk.

The CARES Act by contrast was put together in mere days, as a time when we were being asked to stay home for a few weeks to flatten the curve.  Few could appreciate at the time how COVID-19 would impact the broader economy.

2. Servicers reacted quickly while juggling their own challenges

After the passage of the CARES Act, forbearance requests spiked in early April. Servicers scrambled to meet the demand while also managing the transition to remote work themselves.

Meanwhile, intervention by the Fed drove interest rates down and led to a spike in refinance activity.

In one of the stranger paradoxes of 2020, even as loans in forbearance reached 4.3 million loans, mortgage bankers had one of their biggest years on record in response to falling interest rates.

3. Borrower behavior is hard to predict

In prior blog posts, we have talked about the ways that borrowers were exiting forbearance. When the CARES Act passed, policymakers believed twelve months would be enough.

What they didn’t anticipate is how many borrowers would continue to pay their mortgage while on forbearance, or the number who would exit via lump-sum repayment. 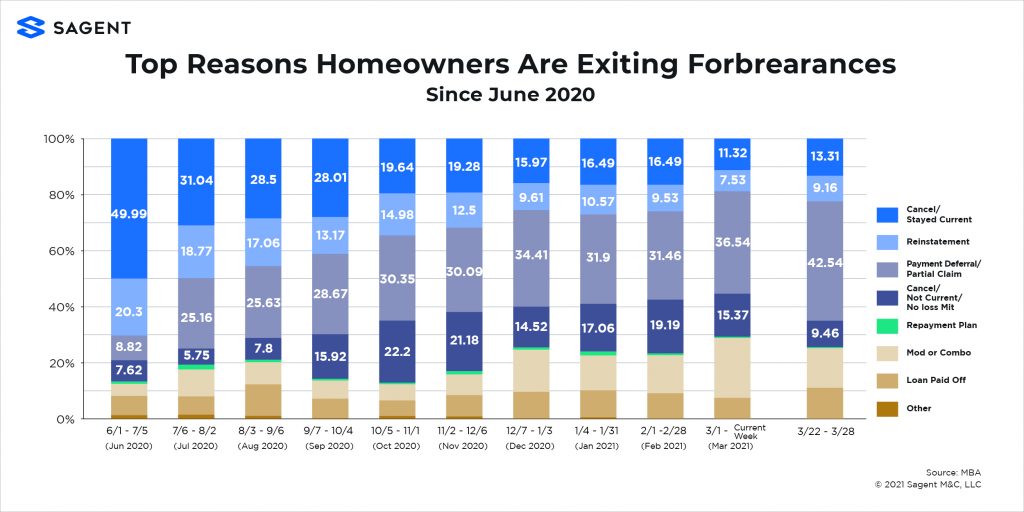 Moreover, while 12 months was once thought to be enough time to be on forbearance, recent action by the Biden administration has demonstrated that some borrowers may need more time and now have access to 18 months of forbearance.

4. The housing system is more resilient than it was in 2008

The housing system is much better-situated thanks to lessons learned from the 2008 financial crisis.

In a prior blog post, I wrote about how 2020 was different from 2008.  In short, Dodd-Frank created a number of important guardrails, from better origination standards in QM and ATR to clear and concise servicing standards that have created a safer housing system for borrowers.

5. Technology has played a critical role in helping servicers and borrowers alike during this crisis

In 2008, there was no such thing as borrower self-service. The idea of a digital channel was in its infancy.  The iPhone was still a few years away from becoming the must-have accessory.

Fast forward to 2020 and technology is re-branding mortgage servicing.  Digital self-service channels like CARE have helped drive customer engagement at a time when it was most needed.

Meanwhile servicing platforms like LoanServ and Tempo have provided the necessary tools to allow servicers to process forbearance and loss mitigation requests quickly and easily to get borrowers back on the path to cure.

As 2021 continues and COVID-driven forbearances mature, technology will again play a critical role in helping servicers and their borrowers navigate what comes next.

In a tumultuous servicing climate, it will be the servicers with powerful servicing technology who will emerge from COVID with stable, happy borrowers and a competitive edge in the market.

The next 6 months for servicers are critical. How can we help you stay ahead of customer needs and regs?